Press enter to begin your search

The Grotjahn group’s major research focus is aimed at contributing to innovation and understanding in the areas of organic reaction catalysis, clean energy production, nanotechnology, and medicine. The importance of chemical catalysis is highlighted in a recent report, which states that catalysis-based chemical syntheses are involved in 60% of today’s chemical products and 90% of current chemical processes.  In the U.S., the chemical industry makes the largest trade surplus of any non-defense-related sector ($20.4 billion in 1995), represents 10% of all manufacturing, and employs more than 1 million people. The Grotjahn Group creates catalysts which operate in new ways by transforming organic molecules more quickly, in higher yield, with fewer by-products, and less waste.  One of our goals is to contribute to sustainability and green chemistry.

Our focused subgroups are:

We are probing the combined effects of a metal and ligands capable of donating or accepting protons or hydrogen bonds.  As an example of the power of bifunctional catalysis, we have been able to make catalysts for anti-Markovnikov hydration of alkynes which are more than 1000 times faster than others reported in the literature, accomplishing within minutes a reaction that would take more than a million years to complete without catalyst!  A paper from our group was featured in Chemical and Engineering News (October 4, 2004 issue, page 31).  This work has led to a patented catalyst which is sold for research purposes by Strem Chemicals.  In ongoing work, we are trying to understand fully the reasons for the high activity, productivity, and selectivity of the new catalyst. 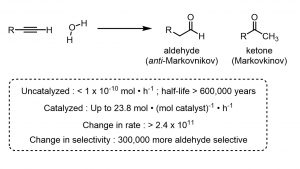 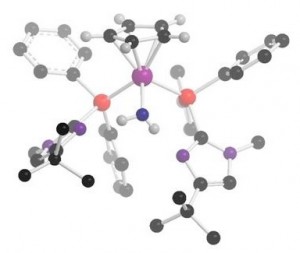 A second example of the power of bifunctional catalysis is shown below, where we find that the catalyst shown can move alkene double bonds up to 30 positions down a chain of carbon atoms, yet shows useful selectivity in other alkene isomerization reactions.  Control experiments showed that the heterocycle accelerates reactions by factors of up to 10,000.  This paper was featured in Chemical and Engineering News (July 23, 2007 issue, page 29). This and other reactions are the subjects of exciting investigations in the Grotjahn lab.

One highly active and motivated area of study is on the generation of renewable fuels, such as hydrogen gas via solar photodecomposition of water. A major challenge in achieving efficient photoelectrochemical water splitting is the oxidation half reaction. We have been investigating properties of molecular water oxidation catalysts in the hopes of slowing the rate of undesired catalyst degradation through the generation of new robust catalysts.  We have also been developing new tools for measuring catalyst activity and identifying decomposition pathways with the hopes of developing a deeper understanding of what makes a good water oxidation catalyst. We recently published a catalyst which, through the addition of an active-site sulfonate group, showed increased activity in acidic conditions.